The Lewes Neighbourhood Plan has received a Commendation for Excellence in Planning for the Natural Environment at the Royal Town Planning Institute’s South East Awards for Planning Excellence presentations 2019.
The RTPI SE Awards presentations were held recently at the Emirates Spinnaker Tower, Portsmouth and the Award was presented by the President of the Royal Town Planning Institute, Ian Tant, and the Chair of the judging panel, Sue Percy CBE; to Richard Eastham, of consultants Feria Urbanism who received it on behalf of the winners.
The award was for a submission entitled “Lewes Neighbourhood Plan – Pioneering an Ecosystem Approach to Neighbourhood Planning” and goes jointly to Lewes Town Council’s steering group; the South Downs National Park Authority, and consultants Feria Urbanism. 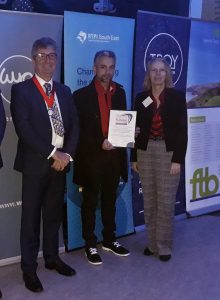 L-R Ian Tant, Richard Eastham, Sue Percy CBE
Current Mayor of Lewes, Cllr John Lamb said:
“All the contributors to the council’s Steering Group over the past five years should feel very proud. Thank you, everyone involved, for a terrific achievement. This new approach to a neighbourhood plan has already received many accolades and was the brainchild of Lewes’s own Dr Colin Tingle, who sadly died before seeing the plan completed. I hate to mention the “R-word” but it certainly helped our Lewes plan to receive a 92% “Yes!” vote in the statutory public referendum earlier this year! Enormous thanks to all who helped put the plan together”

A Neighbourhood Plan is a type of plan, introduced by the government in 2011, which can set out a vision, aims, policies and proposals for future development of a neighbourhood. Neighbourhood Plans can only be adopted following independent examination and a 50% ‘yes’ vote in a public referendum, but if they are adopted, the Plan forms part of the statutory development framework for the area so that the local authority and planning inspectors will have to take it into account when making planning decisions. Neighbourhood Plans are about the use and development of land and can deal with a range of social, economic and environmental issues. They can be comprehensive, dealing with a wide range of issues, or they may have a more limited focus. They must conform to national planning policy and the Local Plan – which has been developed, for Lewes, by the South Downs National Park Authority.
The Lewes Neighbourhood Plan was developed over five years by a Town Council Steering Group, which included councillors and representatives from community groups and organizations, aided by professional officers and consultants and received a 92% “Yes!” vote in the referendum in March 2019 and was formally “made” by the South Downs National Park Authority in April.

What,s on at the All Saints